A supernatural sea-dwelling female of general European maritime folklore. The Irish mermaid, murduac, is Anglicized to merrow. The Morgans, or sea-women, off the coast of Brittany are considered beautiful, siren-like, and and dangerous to men.
Standard Dictionary of Folklore: Mythology and Legend 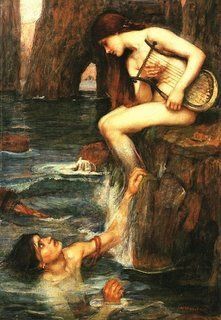 Fair her face, and white her skin

Have you courage her to win?

And her wealth it far outshines

She exceeds all heart can wish,

Neither rude nor tigerish.

Bus sweet as roses in a bower,

And graceful as thy lily flower. 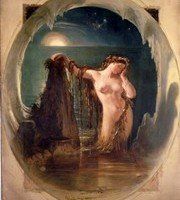 The Origins of the Harp' Daniel Maclise (circa 1842)

Mermaids are usually depicted as having the head and body of a woman to the waist, and a tapering fish body and tail instead of legs.

They live in an undersea world of splendor and riches, but have been known to assume human form and come ashore to markets and fairs. They often lure mariners to their destruction. 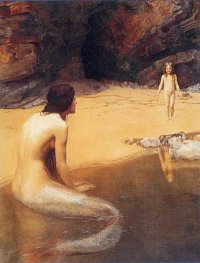 The Land Baby 1909 by John Collier

In seventeenth century England, the existence of mermaids was as firmly established as the existence of shrimps. They were regularly seen off the coast of Britain, and travelers brought back tales of encounters with them from every corner of the seven seas. 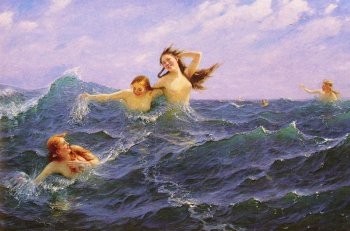 The waters.... lead downwards to the underwater world, an idea found in all lands and the location of paradise in Celtic and Maori lore. Fountains, springs, wells, can be entrances to a magic world or to the realm of souls; they are part of the great feminine power of the waters, the waters of both fertility and death which sustain and destroy. 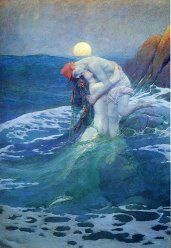 The natural history of mermaids cannot be understood by the methods of natural science alone. These hauntingly beautiful goddesses of the sea, full of mystery and danger, were surely conjured from the chaos of the waters in answer to some primal human need.

Their genus and species may not be carefully docketed in the Nomenclator Zoologicus, but their reality in terms of poetic truth is firmly established in the impassioned imagination of men. 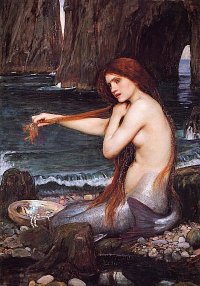 Since once I sat upon a promontory,

And heard a mermaid on a dolphin's back

Uttering such dulcet and harmonious breath

That the rude sea grew civil at her song,

And certain stars shot madly from their spheres,

To hear the sea-maid's music

A mermaid found a swimming lad,

Picked him for her own,

Pressed her body to his body,

Laughed; and plunging down

That even lovers drown.